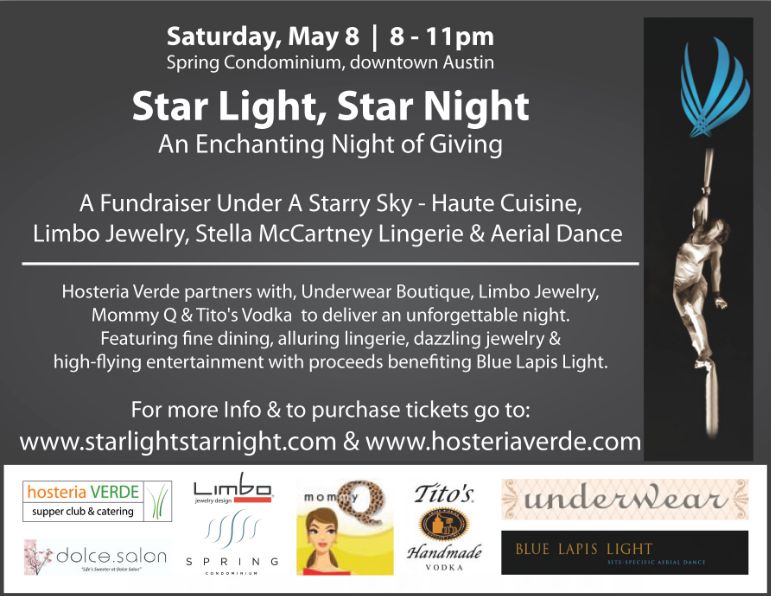 Yes, that’s my little logo. MommyQ is sponsoring this event with a bunch of other great businesses and I can assure it will be AWESOME. We scouted out the location and discussed details today. I was excited about it before, but I’m even more excited about it now. Details about the scrumptious menu will be coming soon.  Also, if you’re a mom here in Austin and you haven’t been to Underwear yet, shame on you! This shop is a little slice of heaven!

Go ahead and buy your tickets to Star Light, Star Night today before they’re gone.

Skip the turkey swimming in gravy and opt for something a bit more unique. A bit more Austin. A bit more weird…

If you’re staying in Austin for the Thanksgiving holiday, you’re in luck! Thanks to Hosteria Verde Supper Club & Catering and FLAVORS of Austin, you can experience four consecutive days of foodie delights. Plus, proceeds benefit the Sustainable Food Center so you can feel good about giving back to your community too.

The kick-off event is a lobster brunch with plenty of Tito’s Handmade Vodka. Then you can gamble your holiday stress away playing casino games and enjoying the soothing sounds of one of the city’s most fab lounge singers at the ‘Old School Las Vegas’ event. Next up is ‘Arabian Nights’ complete with belly dancers. The festivities end the following night with a salute to Mexican cuisine. And yes, Austin’s QVC Lucha Libre Team wrestlers will be providing serious entertainment.

Last week, MommyQ came across an interesting story about a college student at University of Texas who is trying to prove that $20 is a decent amount of money. David Lee, a senior at UT and an advertising major, decided to see if he could exist on $20 worth of food for 20 days. He got the idea from a contest being hosted by UFCU (University Federal Credit Union), ‘What Can You Do With $20.09?’

I blogged about David’s quest to survive on $20 on Strollerderby and the responses were a bit more controversial than I anticipated. Obviously, in this economy everyone is feeling serious financial pressure.  To make a long story short, readers were upset that David was feigning to be poor to prove a point.  Quick to respond, David eloquently restated his reasons for doing the challenge. He was surprised that his actions were offending anyone and he apologized for any misunderstandings. (I encourage you to read the original post and comment!)

As someone who has been a member of blogosphere for almost two years, I understand David’s surprise. I have blogged about seemingly harmless topics like Jennifer Aniston and President Obama’s ‘dad’ jeans and have been berated by readers for my opinions. As David states on his blog, “I wonder what positive influence this challenge will have in my life…” He has certainly learned more lessons beyond what $20 can buy you in the grocery store. He has learned the lesson every blogger quickly learns, personal opinions are plentiful and people love to disagree.

I applaud David for his idea to survive on $20 for 20 days and think the results are quite positive. Today, many of us withdraw a $20 bill from the ATM and feel like it is chump change. He has shown us that with some ingenuity and help from his online community, he can make the most out of it. The rules he made for himself are clever, like he cannot accept free food from people, but he can eat free samples. If a question comes up about rules, he lets his readers decide. His blog journaling his cheap foodie adventure is funny and entertaining.

The average person seems to think this challenge isn’t challenging. I think those people are a bit delusional. They seem to think Ramen noodles is the answer. Let me say this, the notion of living on only Ramen noodles for 20 days is totally absurd, not to mention unhealthy. David isn’t sitting around eating junk food either. He’s trying to be healthy too and that in itself is quite courageous.  He has four days left and I wish him all the best. 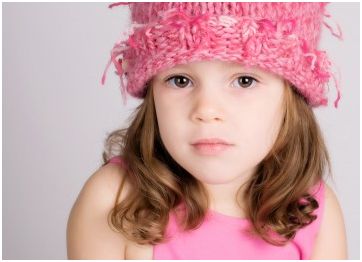 Vote for cute kiddos and support a worthy cause! It’s easy and fun to donate to the Now I Lay Me Down To Sleep foundation. By participating in the National Charity Model Search, you can also support Austin photographer, Kelli Hierholzer with Fancy Pants Photography. One vote costs $1 and proceeds are donated to NILMDTS. Check out these cuties here and here!

If you haven’t heard about NILMDTS, it’s an incredibly touching foundation. They provide a helping hand and healing heart to families who lose a baby shortly after birth. In the midst of grief, confusion and pain a family might not think to photograph their baby. NILMDTS offers gentle and beautiful photography to capture short, yet cherished lives. With a network of over 6,000 volunteer photographers in the US, the foundation offers comfort in a unique and lasting way.

Grocery shopping gotcha down? Well, turn that frown around in an eco-friendly kinda way. Call it “grocery shopping nirvana” at its best. A reusable grocery bag system that does the thinking for you.  All you have to do is…well, shop! Easy peasy, lemon squeezy.

This is the gro-pak™ from BlueAvocado and it will revolutionize the way you shop for good. From large multi-use bags to tidy totes to ventilated grocery bags, this system has everything you need to be smart, safe and oh-so-stylish in the process.

Think of it as the new “pod” you haven’t heard of yet, but you’ll love it just as much as those other pods you’ve come to cherish.  See, these reusable bags bags fold into themselves, creating handy dandy little pods you can transport with ease. I’ve used them myself and they are just amazing. Check out the library of kits to find the perfect one for your shopping lifestyle.  Remember, these eco-kits replace 6-15 plastic bags per trip. 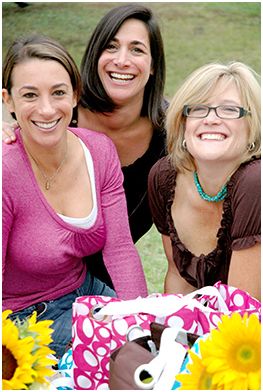 Aside from the fabulous products, the company itself was founded by an equal amount of fabulocity.  A couple of momprenuers and a hip little green maven decided right, convenient and cute should be easy to do, especially if you’re new to the green life.

Recently featured in one of my favorite magazines, Real Simple, and also mentioned in Daily Candy, BlueAvocado is a name you should know. What are you waiting for? Go shopping!