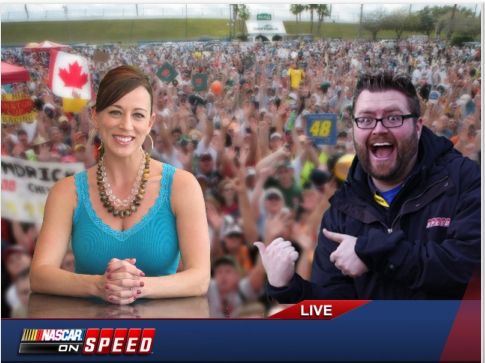 Well, another NASCAR race under my belt as of Sunday. I think that makes the grand total six, not counting two trips to Vegas for Champion’s Week. The hubby & I headed to Dallas last weekend, where we got sit about 17 rows away from the racetrack. At Texas Motor Speedway, that experience will leave you breathless and covered in a thin film of rubber, debris and smoke. As you can see from the image below, the SPEED folks know how to throw a party at the track. , you crack me up. 😉

My first NASCAR race happened in 2007, where I traveled to Watkins Glen for the race when I was about seven months pregnant. Not kidding! I wasn’t the only very pregnant girl there, but I was the only one who wasn’t smoking and drinking. Not kidding again. I wasn’t a fan of the sport at all at that time, but soon began to follow it after experiencing a race in person. It is absolutely something you MUST do once, even if you don’t like NASCAR at all. It’s the perfect combination of order and chaos. Since then, I’ve sat in VIP seats with hot passes, cold passes, pit passes, you name it. I’ve been behind the scenes, in the scenes, nowhere near the scenes, with credentials, without credentials and that being said, I’ve met 80% of the drivers.  I’m hooked.

Let me tell you, as I was taking all of various video clips during my trip to the race, I knew it should have Lady Gaga’s “Bad Romance” playing in the final cut. However; due to the potential for scary and costly copyright issues, I couldn’t do that. But it’s a fitting theme for my relationship with NASCAR. Why? Because of all of the crap and jokes my non-NASCAR fan friends like to dish out, which is about 99% of them. That’s why it’s a bad romance. I wish I didn’t like it, but I do. And I don’t see us splitting up any time soon. You know why? In addition to my feelings for NASCAR, I have two little boys who also love NASCAR. Hello COOLEST MOM EVER. At least until they’re teenagers.