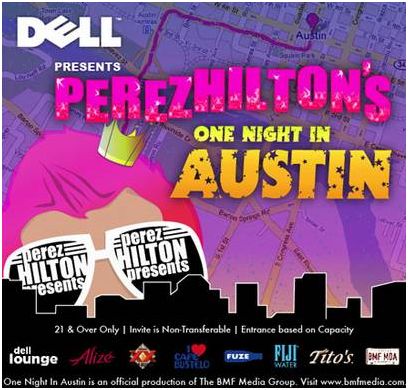 MommyQ really wanted to do SXSW this year, since I live here in the Live Music Capital of the World. But looking at the extensive schedule was too overwhelming, so I decided being lame was just dandy with me. Well, speaking of “dandy,” early Saturday a.m. – the last night of SXSW – my Inbox had a little surprise for me. I got two tickets to the Perez Hilton “One Night in Austin” soiree. And me being the mommy that I am, I absolutely had to attend! After all, Perez is my bloggy hero.

My best friend and I showed up around 9:00 p.m and the party was in full swing. And I mean swing literally because there was an indoor playscape where grown (drunk) adults were swinging their hearts out.  Luckily nobody got hurt because there was a faux lawn where lots of folks were sitting. Someone could have easily taken a stiletto to the head if they weren’t looking where they were going. Hesitating dangerously close to the swings was a bad idea. There was a guy monitoring the swings and he scolded people who were swinging too high. Funny to see adults get in trouble like that!

Anyway, I was talking and chatting through most of the music acts. I did pay attention when Solange, Beyonce’s little sis took the stage. She is stunning! The most beautiful face, just like you’d come to expect from a Knowles. She’s kind of like the rough one, cussing and singing about drugs. I applaud her baby blue eye shadow that you could see for miles. I didn’t get the outfit though. White tank, aqua skirt with white clouds (?) and weird loose yellow and silver-ish tights that weren’t tight. Regardless of the questionable fashion choices, the lady can dance. I thought ‘I Decided’ was great and I’m sure it will be topping the charts soon.

Halfway through the party they ran out of vodka. Yikes! So, I drank Alize Red Passion, the premium fruit liqueur. Ha! Let’s just say it was very fruity and fitting for the crowd. I’d say 80% of the men there were extremely comfortable with their sexuality, which is not straight. “Not that there’s anything wrong with that!” It was a fun, fun, fun crowd.

That being the case, there were more than a few eyes scrutinizing the fashion Dos and Don’ts parading around. I think I passed the test because my shoes were described as “fierce” on more than one occasion and one guy growled at me. Believe it or not, MommyQ was rocking the shiny tights and they seemed totally appropriate. Then again, Alize was part of the equation. Anyhoo – my best friend was rocking in her usual style and let’s just say everyone luh-huvved her! Ooh la la. I think she made 300 new friends on Facebook during the party.

Perez was hilarious wearing his pink hat and lots of attitude. He throws a fabulous shindig.  The worst part of the night was the 2-hour wait for a cab. TWO SOLID HOURS waiting for a cab. Triple ugh! MommyQ is way too old to hang like that. My fierce shoes expire after about 5 hours. All in all, it was exactly what I had expected and possibly even better. Cheers SXSW! Until we meet again next year.