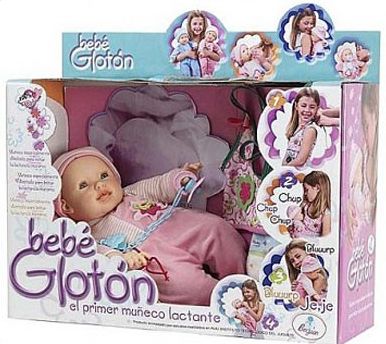 If you haven’t heard the buzz about this new doll, I’ll break it down for you. Breast Milk Baby is a doll that allows little girls to simulate the act of breast-feeding. And as you can imagine, this toy is creating waves of controversy as it will soon be available in the US. So what’s the big deal about another doll? I mean, we already have plenty of dollies that eat, pee and poop. Well, it could be the vest with sensors to trigger nursing or the suckling sounds or the fact that little girl can loosely experience latching. Pick one. Here’s a recent article from ABC News.

Today, I spoke with FOX 7 about it and shared my thoughts as not only a mother, but a mother who happens to know a lot about baby products. I even posted something on Facebook about my impending interview, which created its own little swirl of debate. This is a controversial doll for many reasons. Instead of exploring the obvious, I thought it was far more interesting to hear reactions about the doll from dads. After all, dads shower their daughters with gifts. Will they buy Breast Milk Baby for their daughters? One dad added his two cents to my lively Facebook discussion by posting the following:

“Don’t want to drag another ‘party’ to the discussion unknowingly… But having had this very discussion today…. It’s not about sexuality or nourishment as much as it seems to be about the publicity of it. Should be private and between a mom and child, not public and out for display for everyone to share. I think public display kind of sensationalizes it. Back to the doll – is that the right WAY to send the message or teach our children? My girls will never own one of these, but you can bet they will know everything they want and need to about breastfeeding and discretion.”

Bravo, daddy! I think he illustrates great points and let’s face it, dads are an integral part of parenting, so why dismiss their feelings? Many dads seem to be annoyed by the doll, because they feel young girls don’t need to experience something reserved for grown women. It’s simply too much, too soon. Other dads think there is a shady sexual undertone that just makes them feel slightly ill. Loving daddies might not want to imagine their sweet little girls as mothers quite yet, especially with all of the valid fears of teenage pregnancies.

Weigh in, dads! What do you think about this doll? Will you buy it for your daughter?