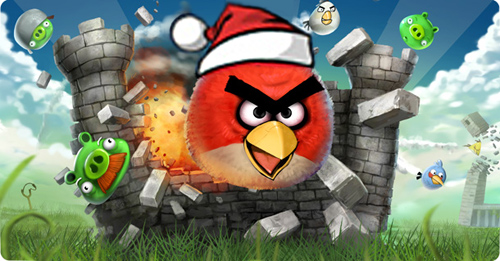 If the oddly amusing sounds of laughing and snorting pigs along with the melodious hum of cawing birds echoes in your ears, you’re no doubt an Angry Birds fan like me. Well, not me, but my boys. Who knew a few furrow-browed birdies could be so darn entertaining?

This ridiculously addictive game has broken all sorts of unbelievable internet records. It recently became the first game in gaming history to be downloaded over 500 million times. In fact, the uber-successful maker of this game, Rovio, has gone on record stating that users “on average log about 5 million hours of Angry Birds play time daily.  More than 266 billion levels of Angry Birds have been played and close to 400 billion birds have been catapulted at the dastardly pigs.”

And just in time for Christmas, a whole new (or “nuther,” as they say in Texas) Angry Birds egg-stravaganza awaits. You can now get a new “Wreck the Halls” edition for the iPhone, iPod touch, iPad, and Mac. For Christmas, Rovio has released an update with 25 new levels and several other added features. The Angry Birds “Wreck the Halls” update can be downloaded in the App Store. I hear you will meet a new Angry Bird and if you’re good enough, possibly King Pig. Gee, I hope he’s wearing a Santa hat.