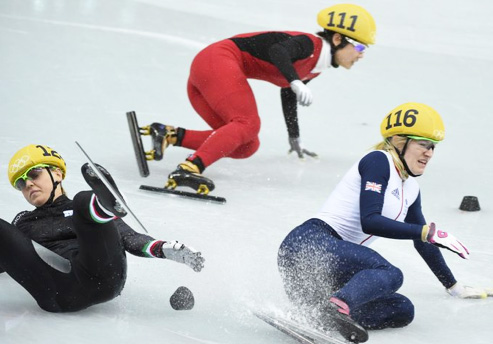 I’ve been tuning in to watch the Olympics and wow, it’s been a crazy week of competition! A few days ago, on the 18th, I just tweeted “carnage” due to all of the crazy slides and spills during the debut of the first-ever parallel slalom race.

Today we see more bad news since a German Olympian failed his drug test. Grrr. Really? Come on. I can’t believe any athlete would even dream of doping during the Olympics?!? And the ice skating controversy chatter continues. (Of course it does.)

If you want to check out a pretty wild slide show of 38 photos that depict “The Agony of Defeat in Sochi,” hop on over to USA Today online. Amazing photos, but oh-so sad.

There’s still plenty of Olympic excitement left including cheering on Mikaela Shiffrin who is halfway to history as the youngest Olympic women’s slalom champion in history. She’s 18 and from Eagle-Vail, CO. You go girl!