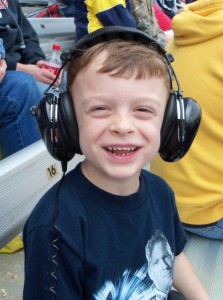 As you know, MommyQ is a huge NASCAR fan and has been for many years. Oddly enough, I grew up in Virginia and had no interest in NASCAR whatsoever while living there. Now I’m practically a Texan and a NASCAR fan for about 3 years. My hubby & I headed to Texas Motor Speedway last weekend for the Samsung 500. Yeehaw! What started out as a rainy, cold, muddy mess turned out to be one of the best weekends ever.

We arrived hoping for sunshine, but spent the day in a gloomy, wet mess. We’ve seen races get rained out on television many times, but this was the first one we had to experience in person. Not fun! The worst part was the mudfest in the parking lot. We got stuck almost instantly, but thanks to pushes from a few fans (in exchange for beer) we got out and found a tiny slice of dry land. Anyway, we shopped for fan gear and ate corny dogs and then they called the race. The new start time was noon on Monday. Back to Austin…

During the 3-hour drive home on Sunday, we decided to come back the next day for the race and bring our kiddos. Our little ones are HUGE NASCAR fans and we thought it would be the ultimate surprise. As you may know, our oldest child is 5 and was diagnosed with Autism Spectrum Disorder a few years ago. What could make a NASCAR race difficult for an autistic child? They usually detest loud noises, they don’t do well in huge crowds, they become easily overstimulated in a stadium environment and so on. We discussed the potential issues and decided to give it a try anyway.  Three more hours in the car that may or may not be worth the effort.

To make a long story short, our kids were in shock & awe as soon as they heard the roar of the engines. We arrived a bit late, so the race was underway. In Dallas, you can hear the cars long before you can see them. With headphones on securely, we walked up the stadium steps and the look on my kid’s faces was a look I will always remember. Sheer joy! The youngest was a bit scared of the noise, even with headphones. But my oldest child defied every trait of autism and he was in heaven. He immediately started pointing to the cars as they flew by us at an amazing rate of speed and named the drivers.

We stood there for a moment, all of us trying to absorb the thrill and the magnitude of the race. We moved to our seats and my little distracted duck continued to point at each car until he had probably named them all about 10 times. Last year, this would not have happened. Last year it was hard to simply communicate, let alone attend an event this big and this loud with so many moving pieces. I’m not sure he would’ve understood where he was or made the connection or understood he was supposed to sit and watch. It would’ve been a three hour drive for a 10 minute stay.

Monday was special because we enjoyed a family pastime together as any normal family. We cheered when our drivers did well and cheered even louder when Jeff & Tony wrecked right in front us! We avoided the rain and enjoyed a beautiful cloudy day together, inhaling race fuel and cigarette smoke. Sounds gross, but it’s the smell that lets you know you’re a true fan. Best of all, two things were shining that day — the sun and my son.

One thought on “Shining Through: Proving Autism Wrong at a NASCAR Race”