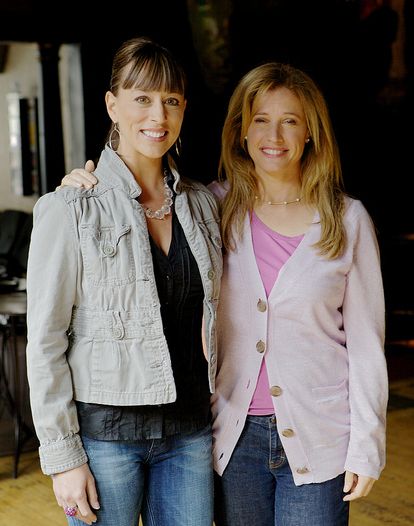 I’m so excited to see Nancy Travis visit Wisteria Lane as Keith’s outspoken mother on Desperate Housewives this season. I’ve always thought she was a talented actress and quite funny too!  From movies like “Three Men and a Baby” to sitcoms like “The Bill Engvall Show,” Nancy brings us lovable, memorable characters. This summer, I had a chance to sit down and talk with Nancy in person, while she was filming her new movie, “A Walk in My Shoes” in Portland, Oregon. “A Walk in My Shoes” is part of a combined effort by Walmart and P&G to bring back family movie night entertainment. Both companies treated me and other fabulous mom bloggers to a unique behind-the-scenes movie experience.

Nancy was funny, personable, sincere and totally grounded. For someone who has been acting since high school and even married former President of Savoy Pictures, Robert N. Fried in 1994, she shows no signs of being affected by the Hollywood scene. We discussed why she took the role in this made-for-TV movie, how she balances being a mom and an actress, how being a mom has impacted her acting and she listed some of her favorite actresses. 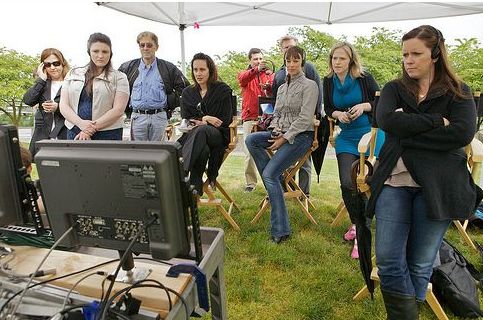 Why she liked this role: The role Nancy plays in “A Walk in in My Shoes” is a stressed-out high school teacher, Trish. Nancy’s character can’t understand her students’ lack of effort in the classroom and why their parents don’t seem to care. Without giving away the whole movie, let’s just say a little bit of magic happens, giving Trish the chance to take a walk in one of the mom’s shoes and experience a new perspective. Nancy said she wanted to work on this movie because she was happy to work on a project that not only brought family-friendly programming to television, but addressed special life lessons. 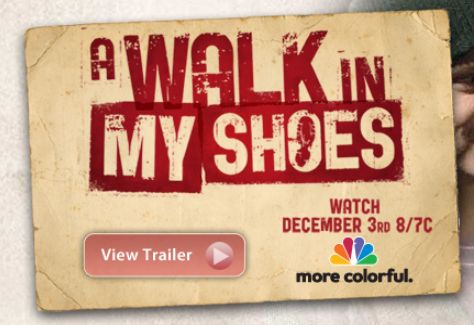 Life as an actress and a mommy: Nancy spoke about her life as a mom and working actress. She said of a work/life balance, “You can have it all, but not at the same time. You have to figure out your priorities to make it all work.” She said motherhood has helped her become a better actress because, “every part of acting is drawing on your life experiences.” Nancy said she’s very picky about the roles she accepts because she must always take her family and community into consideration. “Nothing shameful or embarrassing,” she smiled.

Thoughts about the biz: When I asked her how she’d feel if her children wanted to pursue acting she said, “They should if they come by it naturally and decide they want to do it by themselves. Then I’ll support them as best as I can. It’s tricky as a parent, because for a child, there’s a lot happening in the business they aren’t ready to fully understand.”

Which actresses inspire Nancy? She named Helen Mirren, Cate Blanchett, Bonnie Bedelia and Vivien Leigh. In fact, Nancy laughed and said of Leigh, “I wanted to be Scarlett!”

You can see “A Walk in My Shoes’ on Friday, December 3rd at 8/7C on NBC. The movie will also feature a soundtrack produced by music mogul Randy Jackson that will be available at Walmart starting December 4, 2010. For more information visit the website!