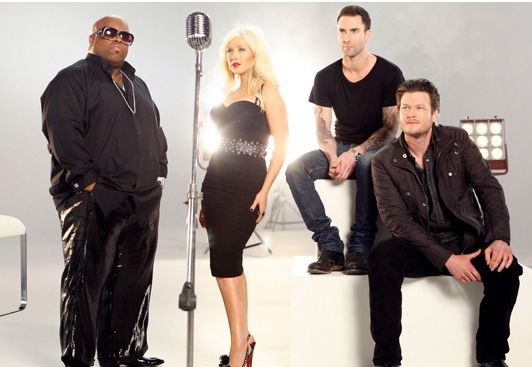 First of all, I’m a HUGE fan of the show. In fact, my husband and I both watched it religiously. We totally freaked out when we realized we missed a show last week. But with all of the fabulousness comes some unfabulousness. In honor of my love for this new show, I will point out its flaws. Just like I do with my husband. Think of it as constructive criticism, NBC.

# 10 – Carson Daly’s smug looks. He always smiles like he knows something really funny, but the rest of us aren’t in on the joke.  And it’s something like you have a piece of Arugula in your teeth and he’s secretly laughing at you, but he’s not gentleman enough to point it out, leaving you to look like a fool. He’s that kind of smug.

#9 – CeeLo without sunglasses. It’s just too weird to see his eyes. He looks much cooler with glasses, so there should be a rule about that. It’s like he’s a total rockstar with glasses and just a normal guy in strange outfits without them.

#8 – Twitter updates with Alison. I get the whole “let’s incorporate social media into a live to show to make it appear really live” idea, but it doesn’t work quite right. The room likes a telethon or something. To make it more cutting edge, they should talk about the bad tweets referencing Christina’s crimped hair or her big mouth or her intoxicating personality. Remember, what makes social media real is the fact that you can’t control it.

#7 – Not enough Adam Levine. This guy is a total babe in a bad boy/hottie/rockstar way. You now, like Carson wishes he could be. We need to have more one-on-one air time with him. Maybe NBC could do a “Deep Thoughts with Adam Levine” a couple of times per show. He just looks so adorable in his tight little shirts and tight cardigans and skinny jeans. More Adam, NBC. More. Adam.

#6 – Less theatrics on stage. I totally agree with Blake. Those goofball dancers are totally ridiculous and unnecessary. They’re incredibly distracting, just like the absence of CeeLo’s enormous watches. I did like the performance with Vicci and her drummers, but the shadow dancing is way too cheesy. I also thought the Mad Max-inspired duet with CeeLo and Vicci was like an explosion of Velveeta. Serious cheese.

#5 – Christina’s hair. One of my hilarious friends @WendiAarons tweeted this, “Christina Aguilera’s hair is so pretty. I wonder what it’s made from.”  That pretty much sums it up for me. The only thing worse than Christina’s awful hairdos was the stress her boobs must have been feeling, knowing they could be popping out on national TV at any moment. Those braids – the big one on side and the tiny one on the other – forced me into therapy. They looked like alien tendrils and now I have nightmares about them.

#4 – Too many bald women. If there had only been one, it would’ve been totally neat and hip. But with two beautiful bald-headed women battling it out, they kind of killed each others’ thunder. It’s like when my husband and I get ready to go out to dinner and inadvertently wear the same color, looking like the world’s dorkiest couple ever. I can tell him to go change, but Frenchie couldn’t tell Beverly to go grow some hair real quick.

#3 – The way Carson Daly holds a microphone. He looks like a creepy dude trying to choke a …uhm, er…wait a second. Sorry, already griped about him.

#2 – CeeLo without both watches. In addition to the sunglasses, he should have to wear two diamond encrusted watches at all times. I saw him with one on each wrist in one show, so it was distracting to see him without them. I was thinking,” Poor CeeLo. Is he having financial trouble? Where’s the other watch. Did he pawn it?  I’m worried about CeeLo, gosh darn it. Is he okay? CeeLo!?!”

#1 – Lack of a tacky trophy. With all of the glitter, sequins, shadow dancing, costumes and alien tendrils, there should’ve been a huge trophy presented to the winner. How do you know you’ve won something unless you get a crazy, horrific, worthless trophy in the shape of The Voice hand-with-microphone? The first thing that should go through your head after wining is, “Holy crap! I won!” The second is, “Where am I going to put this awful thing?”

In all honesty though, a huge congrats to Javier Colon. I honestly believe he has won the toughest singing competition ever. His duet with Stevie Nicks was epic. Dia Frampton is a stunning, unbelievable star too. My heartfelt congrats to them both! Until next season…

2 thoughts on “Top 10 Most Annoying Things About The Voice”